Is your couples counselor sabotaging your marriage? 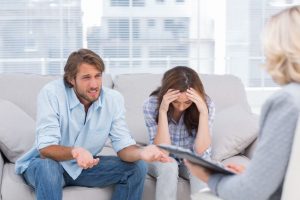 *WARNING: If you’ve Googled “How to fix a marriage” and called the first couples counselor that popped up you may be in for relationship derailment. You may begin to wonder, is your couples counselor sabotaging your marriage?

After spending hundreds of dollars and hours of time in therapy more and more couples are coming to the same conclusion: this counseling is sabotaging my marriage.

Sally couldn’t sleep. Even though she was lying just inches away from her husband, he was a stranger to her.

How long it had been since they embraced, let alone made love, she couldn’t remember, mostly because she really didn’t care anymore.

The therapist she’d dragged her “on-paper spouse” to had insisted both of them verbalize so many dark memories, perceptions, and hang-ups.

The details eluded her at 3:00 am, but the pain had been gnawing at her gut since she plopped down on that therapist’s shiny leather couch.

Can I fix my marriage?

The “D” word was echoing in her ears…

The stats popping up online were not encouraging.

The National Survey of Family Growth projected the probability of a first marriage lasting 20 years was 52% for women and 56% for men.

Was she missing out? Maybe she should chuck this marriage thing and try the swinging singles scene…

Then she opened up an email from her friend Maureen. The excitement in the message was palatable: Maureen and Harry were going on a Caribbean cruise to renew their vows. Huh?

Sally was sure that Maureen too, had sensed her couples counselor sabotaging her marriage. Just months ago Maureen had told everyone how much she loved coming to book club to get away from her husband. Sally decided to call as soon as the sun came up.

That’s when she discovered Maureen had been working with me, the Un-talk therapist. The barrage of questions began – from both ends of the line.

You’ve got to be kidding! That sounds counterintuitive, Sally remarked, rebellious even.

Is Your Couples Counselor Sabotaging Your Marriage?

Call it what you will, but the fact remains that 3 out of 5 couples that adhere to a traditional talk therapy regimen end up divorcing.

Back in the 1960s, Maureen reminded her, proponents of breast-feeding were considered rebels, yet today not only every MD, but every toddler knows there’s nothing more effective than mother’s milk for nutrition, immune system fortification and lifelong bonding.

So much for the anti-rebel argument.

Maureen described in detail how I helped her and her husband devised a brain science-based marriage fortification strategy.

With that tool they could begin to enhance their nutrition, immune system maintenance, and lifelong bonding – all at their own pace and intensity level.

By defying the marriage therapy mainstream

…which holds: let it all hang out, express your inner angst, release your inner whiner, if an emotion floats up to the surface of your consciousness sweep it up in your dogma net and flip it in your partner’s face – the slimier the better.

It is true that in some cases, marriage counseling “works” in the eyes of those couples paying for it in that it drives that final nail into the marital coffin by convincing them their relationship is not worth saving – by encouraging them to end it.

Studies have found that approximately a quarter of couples in talk therapy report that their relationship is worse two years after quitting their sessions.

A whopping 38 percent of those couples get divorced within four years of wrapping up their therapy sessions (and wiping out their bank accounts.)

These psychotherapists who apply the half-century-old Freudian model would have us all talk it through and through, as they translate, and make themselves indispensable for months and even years of our lives.

They create a new object of dependency that impedes partners from communicating with each other; instead of training them to communicate “at” each other, as if banging louder could somehow lead to stopping the noise.

These “traditional therapists” would have us believe that to keep your impulsive stinky thoughts to yourself is to be “dishonest” with your partner.

In reality, spitting out each word on the tip of your tongue is a dishonest disservice to your relationship and all the effort you’ve invested in it.

Verbalizing your every thought sabotages your sacred goal: peaceful, successful, enjoyable communication that enhances and fortifies your marriage – or any relationship for that matter.

What I share in Un-Talk Therapy is how to discern when, where and why (in scientific terms) you should choose to talk, when to interact silently and when not to interact at all.

Initially, curious inquirers seem skeptical: how can you learn to save your marriage in just a few weeks when there’s so much brain science to learn?

They need only to chat for a few minutes with a couple that successfully employed Un-Talk and now understands the workings of their “lizard brain” and “genius brain.”

When vivid visuals, concise definitions and a bit of humor coalesce in my office or Skype screen I can usually cut to the chase and inspire a custom prescription.

Un-Talk Therapy informs you and positions you just enough to assist you in doing what is already in your power to do.

That power of yours is fueled by the latest brain science. You may have heard the news: our brains are not permanently molded at birth!

Through the discovery of neuroplasticity, we now know we can alter those bundles of fat and water pretty dramatically. This means that your habits and brain patterns are not yours forever.

Changing them is not an easy process and requires a bit of training.

It may take a lifetime of adjusting, but that’s why you have a coach along the way, just as you would for the training of your body.

Solutions are different for everyone, but the basic requirements are the same for all of us involved in Un-Talk Therapy.

What do I need to do to fix my relationship?

I can only help alter your mental diet if you bring five things to the table:

And the Un-Talk Therapist must bring:

If you bring these to your Un-Talk session you are guaranteed to have a good time.

You’ll see your old conflicts in a whole new way, and maybe even learn to laugh at your old perceptions.

During our first session together Sally described the end of that fateful post, all-nighter conversation.

She remembers being speechless.

She remembers Maureen asking: “Can’t you think of a time biting your tongue really paid off? Sally was shocked to realize she could not.

What made you realize it?

Did it change the “emotional temperature” in the room?

Pray tell! I so look forward to hearing your stories – they help me rescue relationships all over the world.

To talk to Phil about your relationship, or individual counseling, call today, or fill out the contact form and click Send.

The Solo Partner: Repairing Your Relationship on Your Own

The Solo Partner is the only book on the market that is written solely for a relationship with problems in which one partner refuses to cooperate in repairing the relationship: they deny a problem exists, blames the other party for any problems or promise to make changes and never follow through with the changes.