Is your couch killing your sex life?

Carrie had devolved into a couch potato. If her eyes stayed open long enough she’d catch TV ads for sex-enhancing pharmaceuticals (which carry as much promise as counseling for married couples.) Luckily she was too exhausted to recall the name of the drug, but just alert enough to learn something from the advertisers. She realized their marketing strategy was targeting a demographic that’s still sitting on the couch staring at the screen at 2am – and that’s after sitting on a chair staring at a computer screen all day.

One night Carrie looked at the news feed on her phone and read a headline that jolted her off the couch: inactivity is now the fourth leading risk factor for death from heart disease in the US. Along with high blood sugar, prolonged sitting increases moodiness and depression while decreasing motivation. It also puts a damper on sexual function and libido. Slowly and imperceptibly, one neuron at a time, inactivity was remodeling her brain. She imagined her neurons short-circuiting, like her overheated outlet.

Turning off the TV, Carrie marched over to her boyfriend Jim and his BFF, the well-worn PS4. She made him vow that next time he caught her drooping into a sedentary state for hours and hours that he’d grab her and run for the woods. Literally. They would get themselves outdoors and just move – in any way that felt good. 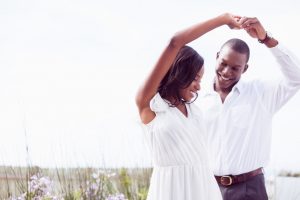 It wasn’t easy the first time, but when she reminded him how long it’s been since they’d made love, Jim stumbled across the threshold. She even grabbed the hose and sprayed it up over their heads, to release a giggle and wash the electronic visions out of their eyes. Then they were off to inhale some fresh air and tranquility in their county forest preserve. Their walk started off slow, their attention darting periodically back to their phones. But gradually they began to absorb the sights, sounds, and sunrays of the forest. It wasn’t until the ride home that Jim admitted how good it felt and how it really was worth the effort – which was actually quite small once he’d gotten his shoes on.

Whether you like to bike, jog, or just walk and inhale the moonlit oxygen, a mere 20 minutes of movement and fresh air can literally awaken your senses, and your sense of the relationship you’re in. Exercising together is ideal, but going alone will serve the purpose. As your heart rate increases and endorphins flood your brain you’ll feel invigorated (and ok, sore if it’s been a while.) You will literally begin to see the world through a different lens. A crisper, clearer less celluloid-y picture in which romance can begin to seem possible again. And if you’re both sore afterward you can chide each other and massage each other into recovery. What better way to invite intimacy back into your bedroom?

Thanks for sharing. Your stories help me rescue relationships all over the world!

To talk to Phil about your relationship, call today, or fill out the contact form and click Send.

The Solo Partner: Repairing Your Relationship on Your Own

The Solo Partner is the only book on the market that is written solely for a relationship with problems in which one partner refuses to cooperate in repairing the relationship: they deny a problem exists, blames the other party for any problems or promise to make changes and never follow through with the changes.